View source
watch 01:36
We're Getting Mutants in the MCU - The Loop
Do you like this video?
Play Sound

The Michi Mk X18 "Plasma Legion" is a 10th generation unmanned tank being developed by the Sumeragi Group in collaboration with overseas company Eunos Inc.. A famously powerful war machine, even during its development period, Sumeragi has yet to produce a functional unit due to technical and bureaucratic problems.

It and an incomplete model, the Proto Legion JB[1], appear in Azure Striker Gunvolt 2 as weapons of the multinational Adept supremacist union Eden. During her time as a spy, Zonda stole data on the tank and provided it to members of The Seven, Teseo and Asroc, who were able to construct a unit and bring it online via their septimal powers

The Plasma Legion is a large, bulky robot that bears a vague resemblance to a bird. It is blue with purple highlights, stands on two short legs, and has multiple cannons and guns attached to its sides. After being upgraded, it gains a pair of horn-like rails attached to its head. 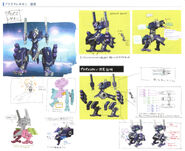 As the Mantis was called the pinnacle of unmanned tanks, development struggled to make a 10th gen tank able to overcome that reputation. Seeking to overcome this stagnation, Sumeragi chose to collaborate with an overseas company, Eunos Inc., and received a tech loan and transfer staff for the project. Due to the transfer staff's involvement, the Plasma Legion became the first Sumeragi machine to have a Latin alphabet character in its designation. (The X in ミチＸ一八式“プラズマレギオン”)

The Plasma Legion's development suffered significant delays due to the confusion caused by the collaboration process, in addition to specifications demanded by development personnel. It's even said that enthusiastic developers who suggested "Let's add a detachable body function" contributed to the confusion. As Sumeragi's higher ups grew frustrated with the delays, they eventually had tech from the project combined with the Mantis to create the Mantis Legion. While the Mantis Legion matched expectations and gained approval within the company, the developers themselves were unsatisfied due to it not really being the machine they wanted to make.[3]

As of the events of Azure Striker Gunvolt 2, the Plasma Legion was still nowhere near being finished despite combat capable prototypes of the other 10th gen tank Spyder being rolled out several months prior. (The Spyder; however, has its own problems too...)

During Zonda's infiltration of Sumeragi, she acquired the tank's design data and gave it to Teseo. Teseo used his septima "Hack the Planet" to recreate the tank, but did so in a rush. The resulting prototype is known as the Proto Legion JB, and lacks many of its fully developed version's features. Teseo uses the robot to attack Gunvolt to prevent him from reaching the Seraph's control room. Gunvolt swiftly defeats the machine, but it is seemingly teleported out by Teseo before he can destroy it.

After being brought to Eden's headquarters, The Garden, the Plasma Legion is updated into its complete form by Teseo and Asroc. Depending on if the player is playing as Gunvolt or Copen, the Plasma Legion will be summoned by either Teseo or Asroc, using the last of their power to order it to destroy the intruder. However, despite the Plasma Legion being at full power, it is eventually destroyed, and the protagonist moves on deeper into The Garden.

A quadrupedal, differently equipped derivative of the Plasma Legion appears as a medium boss.

The Plasma Legion reappears in Mighty Gunvolt Burst as one of the final bosses, brought forth by Teseo during the penultimate stage, Distopia, to face either Gunvolt or Beck. Like the normal Plasma Legion, only its head is vulnerable.

Characters with good aerial mobility have a natural advantage during this battle. Gunvolt's Crashbolt and Voltic Chain special skills can also deal damage from underneath.

It has a collectible pixel sticker that can be gained as a random drop from an enemy.