The Medium Bosses are stronger enemies that can appear once or several times per mission in Azure Striker Gunvolt, Azure Striker Gunvolt 2 and Gunvolt Chronicles: Luminous Avenger iX, and usually have powerful attacks and health closer to a normal Boss than a normal enemy. Unlike bosses, however, they lack phases and dedicated boss healthbars, and are with few exceptions never used to close off a mission.

Finishing them off with a special skill will grant a 200 kudos bonus in ASG1, while in ASG2 and LAiX it will grant a 500 kudos bonus. Some medium bosses also have Secret Kudos bonuses attached to them in the first game.

The Michi Mk 17 Type 3 "Mantis" (ミチ一七式丙“マンティス”) is a 9th generation unmanned tank created by the Sumeragi Futures Institute of Technology (S-FIT)'s 8th department to face violent adepts, being a model intended for nocturnal warfare. While the cooling device of the power core is a bit unstable, the easiness of using it and its high firepower make it a common tank within the Sumeragi Group.[1]

Appearing in 1st Sumeragi, it serves as the intro boss of Azure Striker Gunvolt. After Gunvolt manages to get onto the train holding Joule, three units are sent on the railway to stop him. Two are destroyed by Asimov, but one reaches the train and jumps onto the car before GV. This fight comes with a crate for a foothold. Towards the end of the train, another Mantis (which was presumably already on the train guarding Joule's car) begins firing lasers at GV from off-screen, and in the battle against it there is no foothold.

The "Michi" in its designation stands for its status as an S-FIT 8th department creation. "Mi" comes from 未来 Mirai (Future), while "chi" is the 8th character in Iroha.[2]

The Miha Mk X19 "Spyder" (ミハＸ一九式“スパイダー”) is a prototype 10th generation unmanned tank. It is being developed in parallel with the Plasma Legion, but with a different approach and staff team, and unlike the Plasma Legion has reached the field testing stage of development. While it's got high performance, it also has maintenance and cost performance issues, making many question whether it's worth really being called a 10th gen.[1]

QUILL had no knowledge of it prior to Gunvolt's encounter. In addition to its armaments and ability to cling to ceilings, this robot has a hard shell protecting its core unit which only opens up when it attacks.

It first appears in Biochem Plant as the mid-boss of the stage. As it was still only being tested, a lower ranked soldier protested to deploying it, but was overruled by his superior officer who insisted that blowing away Gunvolt would be a fine demonstration. It was however destroyed by Gunvolt.

Given the meaning of the Mantis' "Michi" designation, as a "Miha" machine the Spyder is most likely a creation of S-FIT's 3rd department. ("ha" is the 3rd character in Iroha)

The EidolonFlower (ViVid) was a gigantic bio-mechanical flower that grew inside the Pharma Lab. Its main purpose was the production of S.E.E.D. a drug normally used for stress relief, however, according to Moniqa, it is addictive, and is capable of enhancing their septimal powers (and in the process used to control adepts). Despite its seemingly docile nature, it is capable of protecting itself when a threat is identified. The plant's weak point is the pistil hidden within the flower, which can be opened by shooting it.

The Michi Mk 17 Type S "Mantis Legion" (ミチ一七式Ｓ“マンティスレギオン”), commonly known as the "Red Mantis", is a stronger version of the Type 3 Mantis, but with improved attacks and much shorter cooldown time for its core.

The higher-ups, fed up with the constant delays in 10th gen tank development, had some of the in-development Plasma Legion's tech re-purposed using the Mantis as a basis, and ordered S-FIT to develop a machine that "made it on time." The end result is the Mantis Legion. While it's not the machine the developers really wished for, due to it clearing the initial Plasma Legion's specs and being efficient in operation and repair due to its similarities to the Mantis, it proved to be very popular within Sumeragi. Some of the transferred Eunos staff worked on the project as well. This is the first time an Alphabet letter has been used in an officially adopted machine's model number.[1]

One Mantis Legion serves as the boss of Urban Run, while three units appear in Eridu. The 2nd and 3rd Eridu units are encountered in areas with spikes, hindering Gunvolt's ability to safely avoid attacks.

Gunvolt, Copen, Tenjian, and Ghauri appear as medium bosses, depending on the campaign. Details on them can be found on their respective pages. 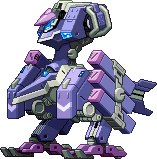 The Proto Legion JB (プロトレギオンJB) was a prototype of the 10th generation autonomous tank Plasma Legion being developed by Sumeragi. Zonda acquired its design data during her infiltration of the group, which Teseo used as a basis to recreate the tank with his Septima. Since it was built in a rush, it lacks many of its fully developed version's features, such as the detachable body, Legion Tornado, ZMC Field, and Stabilizer missiles.[3]

It is deployed by Teseo to block Gunvolt's path when he nears a control room in the Seraph Interior, but is either destroyed or recalled by Teseo as it suffers critical damage.

The Fazent (フェイザント, Pheasant) was a prototype drone that was being developed by Sumeragi aboard their massive airship, the Seraph. Its body is split into an upper and lower half, each containing its own weaponry. It has yet to enter service due to engine problems.

When Eden hijacks the Seraph, Asroc uses his machine enhancing and controlling septima Puppetwire to animate a Fazent, sending it to the city below to try to kill Copen who is pursuing the airship. After being hounded by the drone for some time, Copen confronts and destroys the Fazent.

There were several prototypes aboard the Seraph, which Asroc animated and had distributed throughout Eden to be used by other members.[4] One ended up with Milas' unit, who bring it with them on their mission to sabotage the city's sewage system. It was seemingly placed on guard duty at a drainage canal, and Gunvolt runs into and destroys it as he briefly emerges from the sewer.

The "Prismatic Spyder" was a Sumeragi Spyder tank trapped by Ghauri's "Prism" Septima. It is the mid-boss of Prism Highway. Like the Spyder unit from the first game, the core unit is protected by a thick shell, which only opens up when it attacks.

The exact context behind its appearance is unknown. While Copen dismisses it as yet another Sumeragi weapon fallen into Adept hands, the fact that it's firmly stuck to the ground by crystals may indicate that it was sent to stop Ghauri and was crippled by him.

Blade appears as a medium boss in the introductory stage. Information on her can be found on her page.

The Mantis Zombie (マンティスゾンビ) is a cluster of old parts from the Mantis Legion and other machines controlled by a Sumeragi Institute Adept who wields the Septima Fusion (憑依 (フュージョン).[6]

He appears in City Slums, dropping down behind Copen as the latter passes by the remains of a Mantis Legion. The Adept uses his Septima to draw in the parts and assemble it into a broken down facsimile of the tank, turns himself into a ball of light, and merges with the wrecked machine to bring it to life.

The Mantis Zombie is mostly immobile and lacks some of the machine's armaments, such as missiles or the face laser cannon, presumably due to missing parts.

Each time the machine is disabled and its operator is forced out counts as an individual kill, so for high score chasing it is ideal to remain airborne throughout the entire fight.

Model Number BSM-02 Garand (型式番号BSM-02 ガランド)[7] is a black state-of-the-art autonomous fighter jet developed by the corporation Sol Electronics and used by the Sumeragi Institute of Human Evolution. It is designed to hunt down minos and to operate in places with complicated terrain such as cities, so it's far more mobile and flexible than past fighter jets.

It is equipped with a high-output energy cannon called the Accel Blast underneath its body, rocket pods on its wings, and claws near the nose capable of firing energy shots. The Accel Blast in particular is capable of instantly reducing mino homes to scorched earth.[6]

In spite of its mobility, it is heavily armored and resistant to many weapons, requiring the EX Weapon Photon Detonator to make short work of it.

A unit is sent to the train en route to Sumeragi Building 13 in order to prevent Copen from getting inside, but it is destroyed by him.

The CB04 Ladybug (レディーバグ)[8] is an autonomous security robot that was based on a lady beetle. It flies around while dropping bombs at their targets, and while enclosed, becomes invulnerable until it opens up again.

It is deployed inside Data Center Beta to stop Copen from advancing through.

A large mech heavily resembling the Plasma Legion appears in the ASG3 teaser trailer, and is presumably the intro stage boss.

This model has significant differences from the original. The tail has been equipped with a wheel-shaped device that launches energy projectiles, the two bird-like legs have been replaced with four insect-like legs, the ZMC Field generator has been replaced with some other device, its head rails have attachments on them, and the head has been significantly expanded, with the machine's "face" now being more reminiscent of a cockpit window.

Given Gunvolt's new affiliation, this model was likely stolen from Sumeragi or developed by a hostile faction with access to the Plasma Legion's data.