Grimoires (known as Books or Fairy Tales in Japan) are items created by Eden using Glaive data stolen from the Sumeragi Group and empowered by the powers of The Muse, used exclusively by The Seven. Similar to Glaives, when used, Grimoires empower their owner and force a body transformation in a process known as "Armed Phenomenon".

However, despite their similarities, there is one major difference between Glaives and Grimoires. While Glaives strengthen an adept's abilities, but seals their septima unless said Glaive is used, Grimoires were built with the sole reason of empowering an adept's abilities, meaning not only can a Grimoire-wielder use their powers without transforming, but can use Grimoires to achieve a power greater than Sumeragi's adepts.

When an adept uses a Grimoire, black butterflies swarm out from the turning pages. They converge in a dark aura around the user before dissipating to reveal the adept's combat form.

Upon a Grimoire user's defeat, only the book and the Muse fragments remain. The butterflies become blue and fly to the nearest compatible vessel (Joule or Lola). The book then flips through a few more pages before closing, and disappears in a blue flame. It is currently unknown if this represents the total destruction of the Grimoire, or if that is merely their method of retrieval.

Sumeragi's septima-inducer-and-seal devices known as "Glaives" happened to trigger a side-effect when the factors were unsealed and returned to the adept that owned them. These changed the user’s body into a form based in the type of septima that the Glaive contained. This was the “transformation (Armed) phenomenon". The “Grimoires” are septima-enhancing devices made to purposely trigger said side-effect. The Grimoires are books that contain many pages of magical spells written in them. They employ the user’s septima and a “Mirror Shard” that contains a piece of Joule's "cyber body" as basis. Her cyber body is actually something like her soul and is not a factor. It’s believed that the technology to control a spiritual existence like her is derived from the Glaives. By combining both, they can control and amplify the user’s septima.

Their spiritual and magical functions are weaker than a Glaive by comparison, but the Glaives had their resources dedicated to sealing their user's abilities. Grimoires instead amplify and control the septima since they use the “Mirror Shards” containing Joule’s power as a core, and become tools with power far above that of a Glaive.

Apart from that, the words that Ghauri mutters when he scatters into pieces (“The magic’s vanishing...”) are based upon the tale of “Cinderella”. The magic cast on her vanished at midnight: and similarly, they signal that his Grimoire suffered a great deal of damage due to the battle, and the magic spell inside of it was disrupted. In sum, the magic cast on him was vanishing as well.

Grimoires are the catalyst that The Seven use to transform into their powered up forms. Using top secret technology that they pilfered from Sumeragi, these Grimoires were created using data from Glaives they usurped combined with the power of The Muse.

Unlike the Glaives, which were used by Sumeragi to control the adepts that wielded them, the Grimoires are purely used to strengthen their wielders. The adepts who wield these Grimoires can use their abilities without transforming into their more powerful forms, which means the powers they wield post-transformation are greater than that of any former Sumeragi-controlled adept. 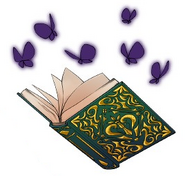 A grimoire featured as a bonus weapon in Dragon Marked For Death, another game by Inti Creates

Sprite sheet
Add a photo to this gallery
Retrieved from "https://azurestrikergunvolt.fandom.com/wiki/Grimoires?oldid=28617"
Community content is available under CC-BY-SA unless otherwise noted.