View source
watch 01:36
We're Getting Mutants in the MCU - The Loop
Do you like this video?
Play Sound

Pursue the Seraph to rescue Mytyl

"A curtain of fear descends upon the city, as cannons roar over evening's gloom. Villainous kidnappers will receive no quarter!"

"Tonight's forecast is gun smoke and bullet rain among the cityscape. In this land, there are no gospels, only the promise of death for the girl's kidnappers."

Chimera is Copen's intro mission in Azure Striker Gunvolt 2, taking place in the stage Downtown. Following a certain rotund robot breaking into the Kamizono Sanitorium, seizing Mytyl, and fleeing, her tracker leads Copen to the Seraph, Sumeragi's massive airship which has gone out of control. Flying across the rooftops with his newly deployed battle pot Lola to intercept it, he encounters someone new and old...

*May not be accurate 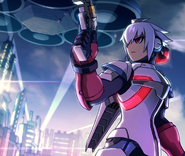 The Seraph, seen in the stage's background