You can find everything about the Azure Striker Gunvolt games here and join the community in our Discord!
Please consider reading our rules to understand our standards and visit the Samples to understand how to create new pages (not necessary if you're already experienced with wiki editing).
Also be sure to check out our Staff Team to know who helps keep the wiki up and running!
The community is always growing, and with your help it can turn into the ultimate knowledge website of the Azure Striker Franchise. Remember to always be nice, and feel free to edit! Be sure to watch the Community Portal to see what pages in the Wiki require editing! 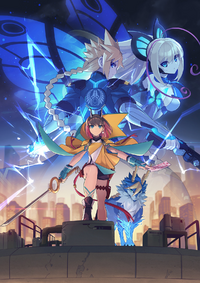 "Fates are sealed as paradigms shift and a new era unfolds. What lies beyond the path toward hope?"
—Tagline

Gunvolt once again returns as a playable character, with a significant overhaul to his moveset. Joining him is a new playable character named Kirin, who uses a mix of ranged and melee attacks with her sword and enchanted talismans.

For the full article, see here.

If you see this, your JavaScript might be disabled or DiscordIntegrator plugin isn't working. If the latter, please contact a wiki administrator.

Want your community included? See how!