At 2017 Bitsummit, Inti Creates announced a Nintendo Switch version of the Striker Pack, alongside Mighty Gunvolt Burst. This enhanced version has all the features of the original pack, as well as multiple new ones, including; a new song, all the Azure Striker Gunvolt 2 DLC, HD Rumble support, high resolution event graphics and text, a 60FPS upgrade, adjustments to several gameplay features (e.g porting the ASG2 Kudos system to ASG1) and more. It released worldwide digitally August 31 2017. A physical edition was released in the Autumn and published by Nighthawk Interactive.

The Japanese Limited Addition comes with the game, a DVD of Azure Striker Gunvolt: The Anime and a Drama CD adapting previously published side stories of Copen, Joule and Quinn. 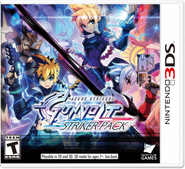 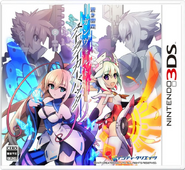 Box art for the Limited Edition version for the Switch.

Localised Box Art.
Add a photo to this gallery
Retrieved from "https://azurestrikergunvolt.fandom.com/wiki/Azure_Striker_Gunvolt:_Striker_Pack?oldid=21942"
Community content is available under CC-BY-SA unless otherwise noted.