The CD contains an adaptation to Drama CD of the short stories published in the Dengeki Nintendo magazine.

. Copen's Story (Tracks 2 to 3) - The short story about what happened to Copen after his second battle with Gunvolt in Firmament (Babel), now in audio format and some slight alterations.

. Joule's Story (Tracks 4 to 6) - The short story about Joule's life, set between her rescue by Gunvolt and her re-kidnapping by Sumeragi near the end of ASG1, now in audio format and some slight alterations

. Quinn's Story (Track 7) - The story of Gunvolt after the True End of ASG1, up until he meets Quinn, setting the stage for ASG2. Now in audio format and some slight alterations 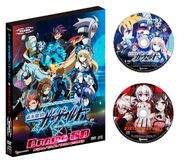 Side Stories
Community content is available under CC-BY-SA unless otherwise noted.